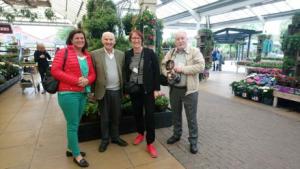 Gardening journalists from across Europe visited Squire’s Garden Centre in Twickenham last Wednesday 16th May on a study tour to look at some of the best UK garden centres. Delegates came from many European countries including Germany, France, The Netherlands, Scandinavia, Romania and Portugal.

Colin Squire and his daughter Sarah, Chairman and Deputy Chairman respectively, of Squire’s Garden Centres showed over seventy international gardening journalists around Squire’s in Twickenham, gave a short talk about the history and development of Squire’s and answered questions. Delegates took loads of photographs and were particularly keen to understand how this family business operates. They were also interested in the diversity of plants and products on display which is a different model to some European horticultural businesses.

Colin Squire said, “It was an honour to host the journalists at Squire’s in Twickenham and show them our garden centre. I was particularly pleased to welcome them in May when the plant area is packed with the most beautiful plants and the shop full of key gardening lines. I am so proud of the centre and our team who work so hard to keep it looking at its best. This was one of the first garden centres to open in the UK back in 1964, and in the last five years has won the prestigious ‘Best Plant Area’ award from the Garden Centre Association three times, we are immensely proud of this and our aspiration is that the centre should be a credit to the borough.” 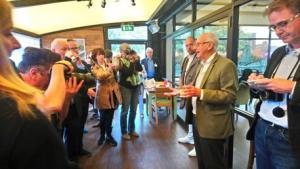 Colin Squire talking to international journalists at Squire’s in Twickenham