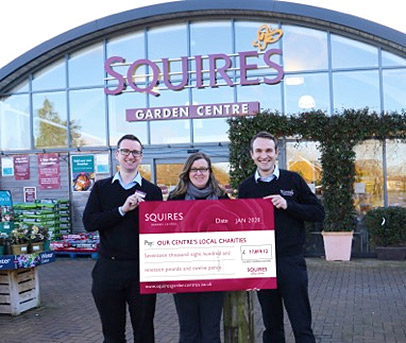 Squire’s donated £1 to charity for every child who went to its magical grottos. Customers also showed that Christmas is a time of giving, by putting money into special wishing wells, fountains and collection boxes at Squire’s, adding to the amount given. The total amount raised was £17,819.12.

Sarah Squire, Chairman of Squire’s Garden Centres commented: “It’s fantastic to be able to bring some New Year cheer to the local charities that we support by donating money from our Christmas grottos, plus the generous donations received from our customers over the festive season. Each of our sixteen garden centres supports a charity that’s close to them, both physically and emotionally, so I hope that the money we have raised will help them with all the great work that they do.”

* Squire’s in Badshot Lea, Chertsey, Shepperton, Stanmore and Washington didn’t have a Christmas grotto, but raised money for their charity from collection tins.