Santa Claus is coming to Squire’s! 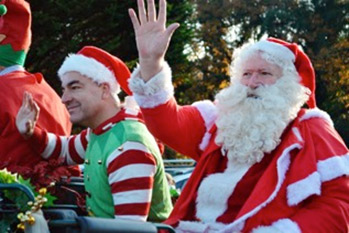 Come and see Santa arrive at Squire’s Garden Centres on an unusual form of transport!

To make sure that his sleigh is in tiptop condition for Christmas Eve he’ll be coming on an unusual form of transport. He’ll be arriving on a Vintage Bus, a Horse Drawn Carriage, an American Classic Car and even a Fire Engine!

Come and see him on:

It’s FREE to come and watch Santa arrive and you can have your picture taken with him. He’s arriving at 9.30am on Saturdays and 10am on Sundays. Squire’s Café Bar will be open from 9am on Saturday and 9.30am on Sunday for you to enjoy a hot drink or a delicious breakfast before meeting Santa.

He’s coming to greet all the good girls and boys, and to open his Christmas Grotto or Circus. Plus he’s even bringing some of his real reindeer with him to Squire’s in Badshot Lea, Long Ditton, Shepperton, Stanmore, Woking and Washington!

Squire’s Christmas Grotto costs £6 per child (£1 of which is donated to charity) and includes a lovely early Christmas present from Santa. It’s open from the date of Santa’s arrival until Christmas Eve. There’s no need to book, simply turn up on the day.

Squire’s Christmas Circus is called “Make Rudolph Shine”. It’s on from 23 November* until Christmas Eve. Tickets are £14 per person and every child will receive a gift from Santa’s elves after the show! Advance booking is essential for the circus at www.squiresgardencentres.co.uk