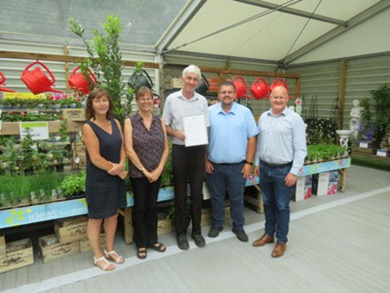 Squire’s in Hersham have been named “Garden Centre Of The Year”!

The Garden Centre Association (GCA) has named Squire’s in Hersham “Garden Centre Of The Year” in the South Thames region for the third year in a row! Squire’s in Woking and Squire’s in Badshot Lea were both awarded second place in their respective categories.

The GCA, which represents nearly 200 garden centres nationwide, unveiled its regional winners on 17th July at an awards ceremony at Haskins Garden Centre in Snowhill.

Sarah Squire, Chairman at Squire’s commented; “I am thrilled that Squire’s in Hersham took the top spot in the Garden Centre category, and that Squire’s in Woking and Badshot Lea came second in their categories, as well as winning other awards! Congratulations to Tim Spearman, Ed Ridgeon, Richard Wells and their teams. This is a fantastic recognition of all their hard work. These are truly brilliant achievements. The GCA inspections are such a great way for all garden centres to learn from one another and inspires us to improve standards across the board.”

The national winners will be judged this autumn, and the overall winner announced at the GCA conference in January 2020.