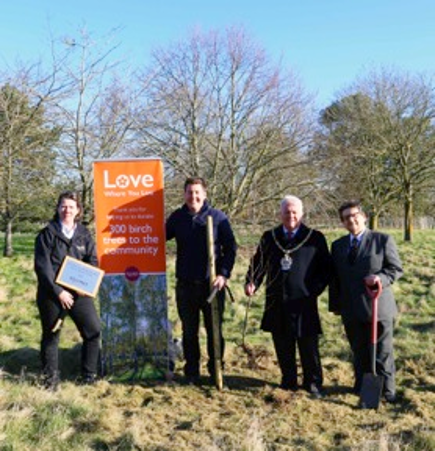 Squire’s Garden Centres has donated twenty Silver Birch trees to Wokingham Borough Council as part of their ‘Love Where You Live’ campaign.

Wokingham Borough Mayor, Cllr Bill Soane joined staff and volunteers from Dinton Pastures Country Park and the garden centre to plant the trees on Wednesday morning. They were placed on part of the old golf course at the country park, with a commemorative plaque to recognise Squire’s contribution

“It was a fantastic sunny morning to get out and enjoy one of the destination countryside parks in our borough for this important initiative,” said Cllr Soane. “Our team at Dinton, joined by staff from Squire’s, showed the type of joint effort we need to ensure our borough continues to thrive.”

“Squire’s should be applauded for giving something back to the local area and being climate conscious at the same time,” said Cllr Gregor Murray, executive member for climate emergency. “While planting trees is a natural choice for a garden centre, tree planting is absolutely essential to carbon offsetting and reducing our carbon footprint as a borough. Partnering and working effectively with businesses is a key aspect of tackling climate change as we work to be a carbon neutral borough by 2030.”

Squire’s campaign started last autumn, when they pledged to donate 5p for every plant sold in September 2019. This has enabled Squire’s to donate 300 trees to parks and green spaces in over 30 locations, including Priory Park in Reigate, Stoke Recreation Ground in Guildford, Hickleys Corner in Farnham, Homewood Park in Chertsey, and Broom Road Recreation Ground in Teddington.

Squire’s Chairman Sarah Squire said; “We are very proud of our ‘Love Where You Live’ campaign. We want to thank our customers by giving back to the local area, and what better way to do this than by providing stunning Silver Birch trees that people can enjoy for years to come. Silver Birch are native British trees that are great for the environment, as they can improve air and soil quality, and they are also good for wildlife too, providing food and habitats for many birds and insects. We have been working closely with local councils and community groups who have planted the young trees this February in numerous parks and green spaces, so that they can be enjoyed by everyone.”