Osteospermum, often known as the African Daisy, is a beautiful flower at once familiar and exotic. As the name suggests, this genus is native to Africa, specifically the southern regions, and is also known to be native to Arabian Peninsula as well. Yet despite this far-flung provenance, these flowers have proven very popular, adorning borders, containers and seasonal beds up and down the country. What is most striking about these flowers is undoubtedly the colouring, which was known to have raised quite a few eyebrows upon the plant’s first introduction to Britain.

Quite unlike a great deal of flowers commonly grown in the UK, the Osteospermum’s petals are coloured with hues of purple, orange and white resembling a kind of metallic paint. This makes the plant quite the eye catcher, either when given prominence in a container display or as part of a bed or border with other species. Aside from this exotic colouration, however, these flowers are otherwise similar to daisies, offering the familiar and well-loved site of thin petals radiating around a centre disc.

Osteospermum are known to produce blooms which close up at night, as a side effect of this mechanism, cloudy and overcast days might fail to coax out the exotic beauty. However, many gardeners feel this merely adds a beguiling quality to these shy bloomers, creating gardens which positively open up when the good weather comes along. 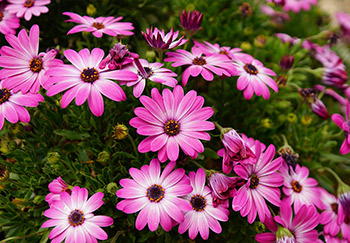 How to Grow - Planting

Osteospermum grow best in a sunny location with plentiful light (as mentioned above, they might fail to bloom in darkened conditions). As such, it is best to select a location with no shade whilst naturally taking precautions against wind damage. A well-drained soil suits these flowers best and they will provide blooms from late spring all the way through to the late autumn.

Most Osteospermum available are hybridised to better suit our conditions, as such some might be infertile and will not grow from saved seed. The best bet is to take advice regarding which cultivar will be best for your garden. As mentioned, plant Osteospermum in well-drained soil as soon as spring brings favourable conditions. Osteospermum are fairly hardy but will require initial care to ensure the soil remains moist. With seed, simply press into the soil and monitor throughout the germination period. With cultivars, dig a planting hole and allow 2.5-5cm of the stems to lie below the surface. After this is done, fill in the hole with a mix of excavated soil and organic matter and water in well. 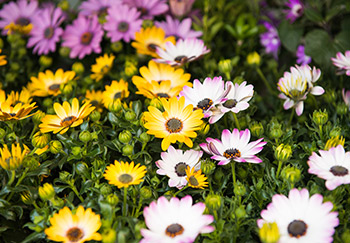 After your Osteospermum are established, it’s important to bear in mind that although preferring constant light, they do not tolerate heat or drought well. To avoid the plants going dormant and ceasing to bloom, be sure to water fairly consistently in such periods, never letting the soil dry out. If you’re growing your Osteospermum in a container, be extra vigilant for drought. To optimise their growth, Osteospermum will also require a regular feeding schedule throughout the growing season. Fortnightly application of fertiliser should be sufficient.

Osteospermum may be hardy enough to survive the winter in very sheltered positions, however it may be a good idea to take some cuttings in autumn to ensure flowers for the upcoming winter. 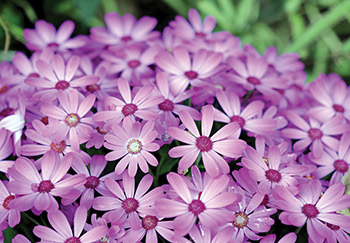 Osteospermum respond well to regular deadheading. Although many are sterile and so will not produce seed, this will at least keep your flowers looking tidy. 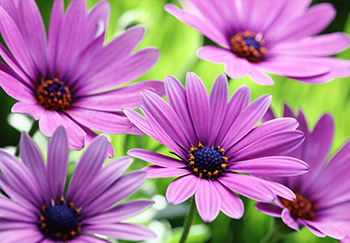 They are normally unbothered by pests, however do keep an eye out for whitefly and aphids which can damage petals and leaves. Catching these problems early can make it easier to bring them under control.

In terms of diseases, grey mould is really the only one you need to worry about. This most often afflicts Osteospermum when air circulation is not sufficient and conditions are otherwise damp. Be sure to keep your plants well ventilated wherever they may be growing. This will also help protect against root rot. 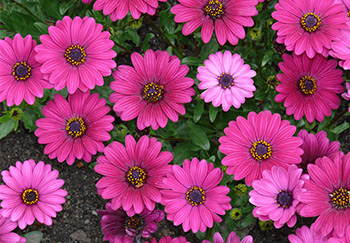 Osteospermum in Your Garden

The unusual colour of Osteospermum does make for a very beautiful flower, but also has the effect of making them fiendishly difficult to pair with other flowers. Careful use of foliage can help you pair Osteospermum with other more common bedding plants.
If you manage to solve this problem, however, Osteospermum work well in a range of garden settings, such as in containers and are very popular for seasonal beds. Some of the shrubbier varieties will work well incorporated into a head display, perhaps with other shrub flowers like fuchsia. 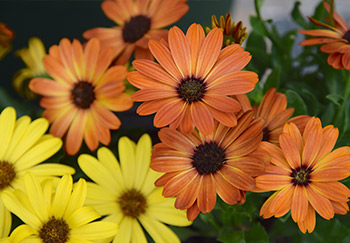