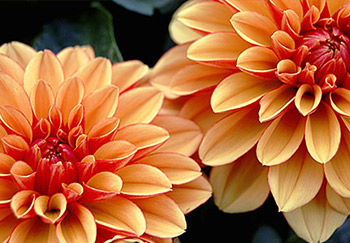 Dahlias come in a diverse array of heights, colours and flowering patterns, meaning they can form part of all manner of flower displays in a garden. Blooming in late summer and autumn, these flowers can bloom with pastel or bright colours, with everything from wide dinner plate flowers to condensed ruffles, and in heights ranging from around 30cm (½ft.) to in some cases over 2 metres (6½ ft.). This diversity makes them ideal for everything from borders to container or pot displays to a showy central exhibition. Dahlias are native to Mexico and are that nation’s national flower. For much of their history, however, Dahlias were grown as a food crop by the Aztecs before being discovered for their great diversity and beauty and brought to Europe by the Spanish. Named after a famous botanist, Anders Dahl, they were from the 18th century onwards selectively bred and hybridised into the 42 species we know and love today. 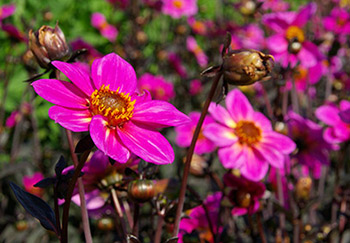 Always grow your Dahlias in free-draining lighter soils where they are less likely to encounter the cold and soggy conditions of heavier soils into the autumn. As dahlias aren’t the hardiest of flowers, you’re best to start them off in the greenhouse and move them outside once the last of the frost has passed in late May. If you’re growing from seeds, it best to plant them in a propagator in mid to late spring and move them outside at the same time. It’s a good idea to improve your soil with some compost or other organic matter – and adding some fertiliser – ahead of planting. Plant tuber about 60 cm (2ft.) apart and 10cm (4 in.) deep. Plant dormant tubers in mid to late April (by the time the shoots come up, the danger of frost will be passed). To conserve moisture, mulch after planting and keep an eye out for slugs, which can be a hazard in the early stages of growth.

In dry weather, water dahlias about once a week and prioritise soaking down to the roots (this is preferable to more frequent shallow watering). Apply a granular feed at planting time and a liquid feed in fortnightly intervals thereafter. When the dahlias come up, staking may or may not be required depending on how tall you expect them to grow and how large the flower heads are. Smaller bedding dahlias will not require staking but everything larger than that will. Bamboo canes driven into the soil – and readjusted for increasing height – should be sufficient. Regular dead-heading will encourage flower growth so try to attend to this task weekly. Cut the stems of fading flower heads back to the first leaf joint. At the end of the season – autumn onwards – dahlias will begin to fade and become damaged by the changing weather. At this point, you can either leave them in situ or store the tubers elsewhere. To leave your dahlias where they are, cut back the stems and cover the tubers with a thick layer (around 6in.) of coarse mulch. This will protect from winter frost. Alternatively, you extract the tubers and store them in a cool but insulating medium such as sand, peat or compost. You may want to keep these in a dry area such as a garage or greenhouse ready for replanting in the spring.

When it comes to pruning and training, the best course of action depends on what dahlias you are growing. You’ll need to pull out the weaker stems with a sharp tug. For smaller dahlias, leave around seven sturdy stems per plant. If you’re growing larger dahlias, aim for around three to four. Pinching out is essential for stem and flower growth. This should be first done when the dahlias reach about 40cm. Find the highest pair of leaves and pinch out to remove everything above this. To optimise flower growth, remove flower buds further down the stem from the outermost bud. This is especially important if you are aiming for large dinner plate dahlia flowers.

Dahlias in Your Garden

The sheer diversity of height, colour and flower of dahlias make them an incredibly versatile garden plant. Seed-raised dahlias are a cost-effective way to create mass colour. For bedding and container growing (as well as indoor displays) shorter cultivars make for the best choice. The mass popularity of Dahlias means you can purchase them in a range of forms to suit your garden timetable. For the least hassle, you can buy potted dahlias in summer that are already in full growth and ready for transplanting to the garden. Alternatively, dormant dahlia tubers in bags are available throughout the year which you can plant in spring for a locally raised display in the late summer. Dahlias respond particularly well to cuttings and this is another popular way of purchasing these popular flowers. Cuttings are the best way to ensure some uniformity of colour if this is your aim – seed raised dahlias will either be in a range of colours or might feature frequent variations on a general colour strain. For many, however, this is precisely the strength of these flowers, and the diverse range of colour is perfect for a bright border pattern. This variation, however, is one of the reasons why care must be taken not to create an incongruous effect with dahlias. The larger forms are not suitable for borders or container growing and will create an unsightly diversity of height. It is best to isolate these larger specimens in some form of central display where their impressive size can be put to best use. Mixing up dahlia flower heads in a single pot or container display, however, can be seriously impressive, especially when using medium height specimens. Dahlias are not hardy flowers, and care must be taken when planting tubers in colder months as they will react badly to even the slightest frost. Dahlia’s fair best in warm, free-draining soil. In cold snaps, it is a good idea to dig up tubers and store them in a cool but insulating medium until the warmer weather returns. 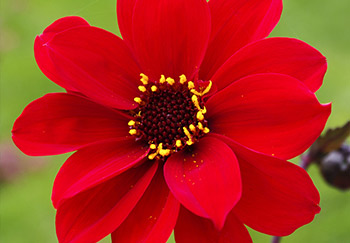