Dianthus is a highly diverse genus of flowers that all share a range of charming characteristics sure to recommend them to any garden. Notable for their heavy clove-like scent and their serrated, frilly edges (the name ‘pinks’ comes not from the colour, but from the familiar pattern cut by a pair of pinking shears). Blooming in shades ranging from lilac to deep pink, dianthus is the perfect flower for bringing both early and late splashes of colour to your garden, blooming first in the spring and again in the autumn. Alpine varieties of dianthus are hardy enough to cope with cold and fast-draining soil but do keep in mind that all dianthus require sunlight, not coping terribly well with shade.

A mainstay of British gardens for some time, the popularity of these flowers derives not just from their bewitching scent, but also from their ability to attract butterflies and bees, bringing some palpable life to your garden.

The dianthus has a noble history, the name literally translates, in Greek, to “flower of the Gods” and these frilly, spicy smelling cousins of the carnation were indeed revered in ancient Greek and Roman times, being used in ceremonial garlands and frequently depicted in art. There is a range of myths explaining how they came to be prominent, and it would seem that they have never lost that high reputation.

The best time to plant pinks and other varieties of perennial or biennial dianthus is early spring. They work well particularly well in borders as the vertical ascent as they grow can be seriously eye-catching. You can grow from seeds or cuttings started indoors. Naturally, it’s best to do this over winter.

Choose a soil with a good amount of well-rotted compost or other organic matter worked in at a depth of around twelve inches. Add mulch but don’t let it crowd around the crowns. If the soil doesn’t drain particularly well or is a heavy clay, consider raised beds or containers; dianthus fare particularly well in containers.

The alpine varieties of dianthus will fare well in wind or fast-draining soil. This makes them perfect for balconies, window ledges, hanging gardens and rockeries. 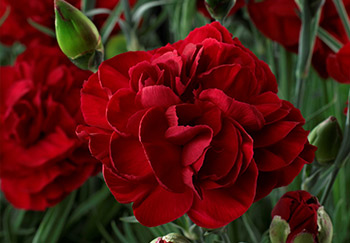 Watering will be required at least once a week, although avoid waterlogging the soil. As mentioned above, a well and constantly lit area is necessary for dianthus as they do not grow in the shade. Dianthus do not require much feeding – compost worked into the soil once a year should be sufficient.

If serious frost is expected, it’s a good idea to transfer your dianthus to a container or a greenhouse to protect against the worst excesses. A four-inch layer of dry mulch is a great way to protect the plants during heavy frost. Be sure to remove this ahead of new growth in the spring. 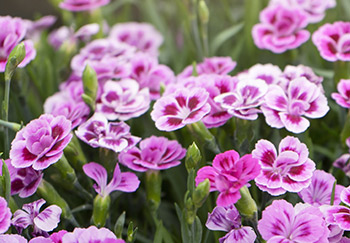 To maintain and encourage profuse flowering, regular deadheading is necessary. Pinch out the entire flowering stem and this will encourage bushy growth from the base, leading to a more voluminous plant.

Around September, trim the plant into a compact mound in preparation for winter. They will need to be kept compact and tidy to best deal with the often-adverse conditions. 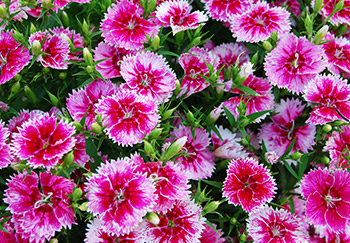 Dianthus in Your Garden

Dianthus stems are tall and thin – almost grass-like – making the plant an excellent choice for the edge of borders. This height also makes the unmistakable scent noticeable to passers-by, making dianthus a real showpiece of any garden.

The alpine varieties will mimic their Austrian homeland as part of a rockery or alpine garden, giving a windswept hardy impression of delicate beauty against a challenging environment – the effect is simply stunning. 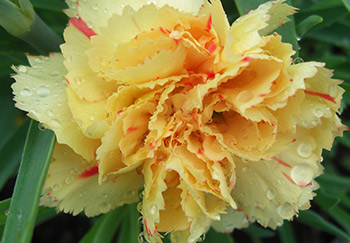 For smaller displays, perhaps a simple balcony or courtyard garden, dianthus makes for an excellent choice, faring well in pots and containers. Some with a trailing rather than upright habit will fall gracefully over the edges of railing or windowsills, making them a stunning flower for those without space for a full garden.

As mentioned above, dianthus produces a rich nectar which is very attractive to bees and hummingbirds, making them perfect for those wishing to bolster their immediate ecosystem or simply have a bit more of a buzz in their garden. 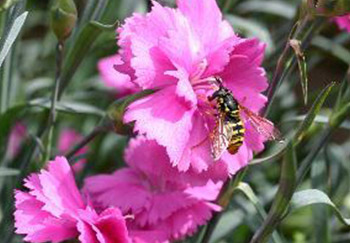